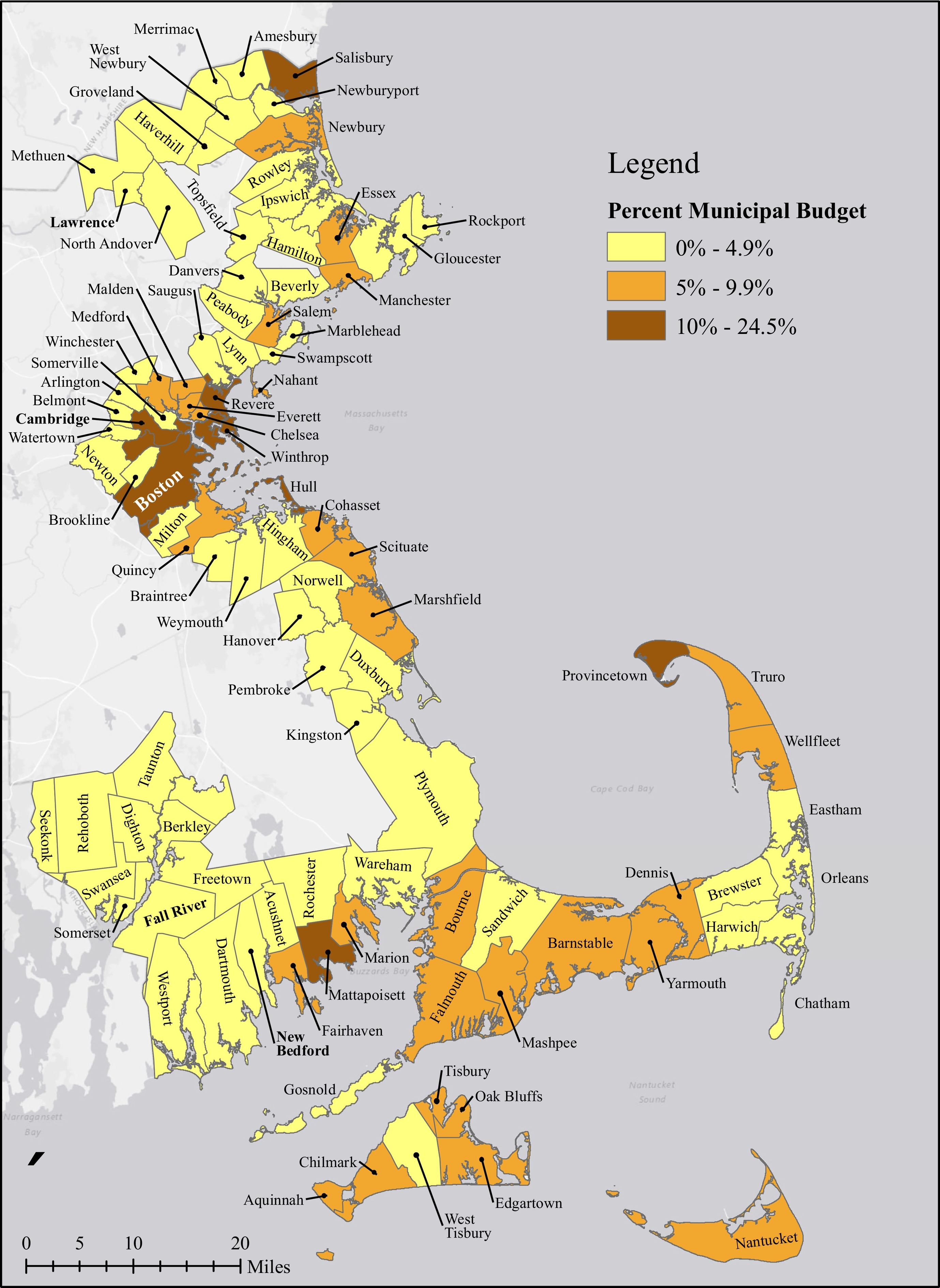 Climate change will have widespread effects on Metro Boston. Heat, rising seas, intense storms, and changes in precipitation will affect the region’s health, homes, economy, transportation, water systems, and more. Cities and towns will be on the front line of these impacts, dealing with flooded neighborhoods, ailing residents, damaged infrastructure, and struggling businesses. A growing number of state and federal initiatives exist to help municipalities assess climate risks and plan for mitigation and adaptation. These programs generally focus on risks and recovery for residents, businesses, and municipal facilities. Less attention has been paid to how catastrophic events and chronic conditions could affect municipal services and finances. In particular, municipal property tax revenue could suffer if climate change causes property values to decline in vulnerable areas. Studies elsewhere have already demonstrated that coastal climate impacts are diminishing the value of affected properties. [1][2]

Municipal budgets in Massachusetts are highly dependent on local property tax revenue. After decades of federal and state funding not keeping pace with municipal needs, local governments increasingly rely on sources of revenues within their control. Statewide, 40% of municipal revenues come from property taxes; along the coast, it’s 60%; in some coastal suburbs, it’s 70-80%. When municipalities face imbalanced budgets, many respond by deferring infrastructure maintenance; cutting services and staff; seeking more grants; and raising fees, charges, or property taxes. With the last option, municipalities face state-imposed restrictions such as Proposition 2½ which limits increases in the property tax levy.

Tax revenues from affected parcels and neighborhoods may decline if climate impacts reduce their market and assessed values. If cities and towns can raise tax rates to compensate for this lost revenue, they may be able to balance their budget, but will effectively shift a greater share of tax collection onto properties less affected by the climate impacts. Substantial climate impacts on property valuation or municipal tax revenue may negatively affect a municipality’s bond rating and cost of borrowing.

Over time, these fiscal realities may reduce a municipality’s ability to invest in adaptation projects. The fiscal pressure may also change the political calculus for municipalities to permit development in vulnerable parts of town where they otherwise would not, especially as a greater share of the tax revenue is borne by less-affected properties. This will intensify the pressure to promote more new growth to ameliorate the problem. If this new growth is also at risk of climate devaluation, now or in the future, it could further compound municipal issues.

A recent study authored by Dr. Linda Shi, a professor at the Cornell University Department of City and Regional Planning, and her former student Andrew Varuzzo examined the relative risk of climate-driven property tax devaluation in the 99 municipalities along or near the Massachusetts coastline. They explored how sea level rise may affect municipal fiscal health. The researchers overlaid spatial data layers of projected sea level rise, current parcel and assessor data, and property tax rates to assess how projected sea level rise could affect the property tax base. The researchers then interviewed municipal officials and reviewed planning documents to understand how cities are responding to emerging climate data on the vulnerability of coastal development.

The study finds long-term sea level rise threatens significant amounts of assessed property value if cities do not take steps to adapt to climate change. In absolute terms, three feet of sea level rise could chronically inundate over 15,000 taxable acres currently valued at $8.9 billion across the 99 coastal communities studied. These properties currently generate $104 million of property taxes annually, roughly 1.4% of total property tax revenue in these municipalities. Six feet of sea level rise would threaten 37,000 taxable acres valued at $64.4 billion, which collectively produce almost a billion dollars of tax revenue, one eighth of the total property tax levy for the 99 municipalities. Figure 1 shows how fiscal impacts grow substantially under higher sea level rise scenarios. It should be noted that this analysis underestimates the property at risk, and subsequent municipal cost due to its reliance on sea level rise data as opposed to knowledge about specific extreme weather events. Sea level rise will happen slowly over time, but severe impacts on properties will happen unpredictably over time with extreme storm events. 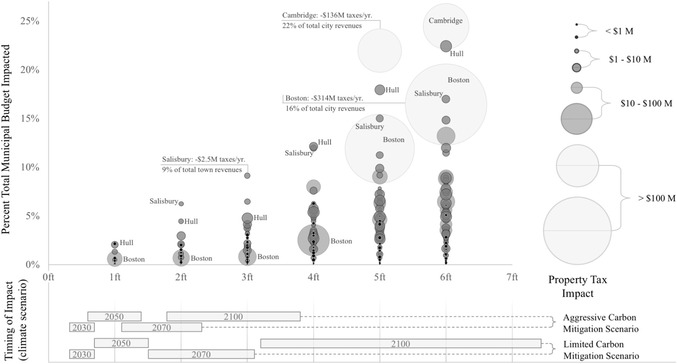 Each bubble represents a community impacted by SLR (99 total at six feet of SLR). Bubble size shows the magnitude of annual property taxes impacted. The y-axis shows the percentage of a municipality’s gross revenues impacted by SLR. The x-axis shows the impact at one-foot increments of SLR. Projections of when sea levels rise vary depending on how aggressively societies mitigation carbon emissions (City of Boston's BRAG report, 2016). These estimates are based on the latest available sea level rise maps from NOAA and require ground-truthing to be more reliable. See the technical appendix for a discussion of the role of dams in protecting the Cities of Boston and Cambridge from flooding.

These risks aren’t spread evenly across cities and town. Many of the municipalities studied have little coastline, few low-lying areas, and relatively little valuable development in the vulnerable places that do exist. In 63 such municipalities, less than 5% of the current property tax levy comes from properties within 6’ of sea level. Another 29 municipalities have 5% to 10% of their levy at risk using that measure. The situation may be most dire in the seven most vulnerable municipalities – Boston, Cambridge, Hull, Mattapoisett, Provincetown, Revere, Salisbury, and Winthrop – where 10-25% of the property tax revenues are at risk.

As properties become more impacted by sea level rise over the next few decades, the region’s municipalities will face increasingly complicated situations. Property assessors will experience considerable uncertainty when assessing value in flood-prone locations and may receive more appeals from owners who feel their affected property has been over assessed. Residents with properties less vulnerable to climate change may object to increases in tax rates that shift more of the property tax burden onto these less vulnerable properties. Low- and moderate-income households may become trapped in vulnerable locations when their properties become devalued on the real estate market and they are unable to sell. Municipalities will spend more resources to protect, clean up, and restore vulnerable properties that produce less and less tax revenue over time. Although administrative boundaries isolate impacts to some extent, fiscal decline in urban centers and outlying suburbs that impairs local capacity to maintain roads, provide housing, and contribute taxes will affect regional and statewide well-being. Migration away from the coast will also increase demand for housing elsewhere, exacerbating current housing unaffordability and displacement. Nor will inland municipalities be immune to these difficulties. Inland flooding, extreme heat, and other climate change impacts will make municipalities across the state face unique challenges.

There are many reasons why municipalities are permitting or even promoting development in at-risk locations. Many communities concerned about the region’s profound housing shortage are encouraging the construction of new homes. Due to the frequent opposition to infill development and higher density growth in and around existing neighborhoods, many cities and towns are forced to look at un- or underdeveloped sites in marginal locations, such as vulnerable coastal areas. As Boston Harbor has become cleaner and more amenity-rich, both businesses and residential developers are seeing waterfront locations as an attractive feature, for the time being at least. Housing demand from very high-income households allows developers to construct the elaborate (if short-lived) resiliency features needed in coastal locations. It’s also important to note limitations placed on municipalities that make development in vulnerable areas more common. First, municipalities cannot adopt building requirements stricter than the state building code. In addition there are legal concerns that making changes to restrict development on coastal properties would be considered a taking, resulting in municipalities needing to pay fair market value for the properties to the current owners. These constraints, along with the fiscal pressures that cause municipalities to chase new-growth revenues make them less hesitant to discourage any revenue generating development, even if it may lead to magnified climate risks in future years. As a result, cities and towns that can attract growth are building on the coast in the hopes that resilient designs will buy them more time.

This research highlights the need for creative thinking about policy changes at multiple levels of government. Even as municipalities lobby for additional state and federal funding for infrastructure, they can also consider how land use policies can help or hinder adaptation and resilience efforts. Creative solutions that address long-standing local challenges may help cities get out in front – before federal and state governments move to impose rules that limit their own fiscal risks from cities’ climate woes.

In 2019, MAPC worked with Dr. Shi and her students to continue this research to several specific communities on the South Shore. The findings of that study again suggest that current fiscal, land use, and disaster policies incentivize coastal cities to keep building in vulnerable areas, to elevate and protect, and to promote high value growth on waterfronts rather than make an orderly retreat to less vulnerable areas. The findings also underscore the fact that adaptation to climate change cannot rely only on local actions, but requires regional, state, and federal solutions. Collective resources could go towards building denser, more vibrant communities. However, current policies of municipal incorporation, local land use controls, regional governance and wealth sharing, and federal infrastructure and disaster management policies do not enable decision making that supports collective regional well-being.

Based in part on this research, MAPC and Dr. Shi have identified the following actions that could be taken as first steps to better understand and create policies to address this issue:

[4] State regulations prevent some development in the current floodplain, however FEMA flood maps are based on historic data rather than projected future flood risk and do not adequately reflect the risks associated with sea level rise.